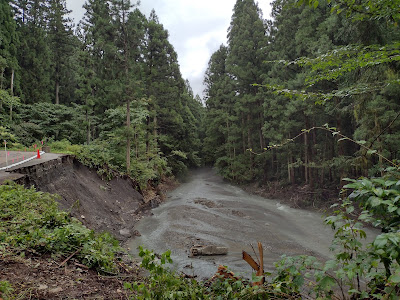 The largest flood on record (since 2000) occurred at Takiya River on August 3rd during record-setting rainfall in the region of Murakami City over August 3rd and 4th. Unfortunately there was much flood damage within Murakami City as several rivers burst their banks, and at Takiya River catastrophic bank erosion and channel aggradation took place. Damage occurred to the staff gauge and at least one of the sensors recording river stage. A second stage sensor is assumed to be buried under about 50-60 cm of fresh sediment accumulation. The whole channel reach shows a similar level of sediment accumulation (channel aggradation). The excess of sediment in the channel has led to braided channel features where multiple channels are flowing around islands of sediment accumulation. 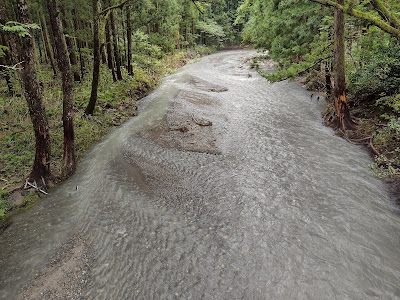 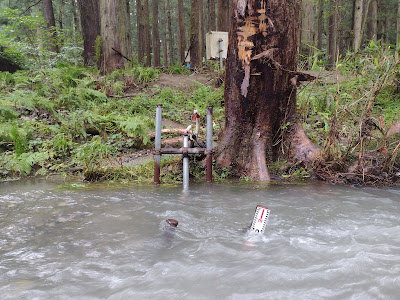 The first hydrograph below shows the river stage during August 3rd to 4th, although correct recording of stage is lost when the stage is rapidly rising towards 3 metres. The sensor cable was snagged by debris and the sensor forcibly pulled out from the sensor housing in the river. We can see there were three large peaks above 2 metres up to this point. Previously, the maximum stage recorded was 2.59 metres on August 11th 2005. The second hydrograph shows the period leading up to the flood from mid-July. The flood on August 3rd occurs very suddenly after a dry period of about 10 days. 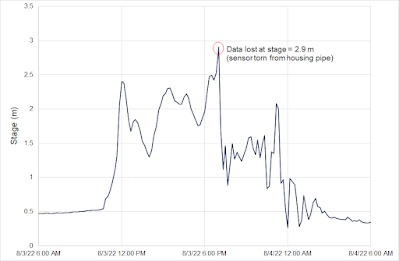 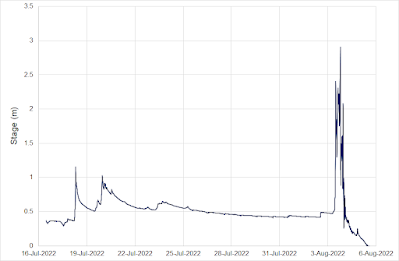 The last catastrophic flood of this magnitude, which also caused severe channel aggradation and channel instability, occurred on 11 August 2005. For the near-future we expect that it will be very difficult to monitor discharge accurately for a period of months or years as the channel adjusts to the huge pulse of sediment which has been introduced by this event. Extreme channel instability means that the rating curve is constantly shifting, so there are large errors in estimating discharge from river stage. 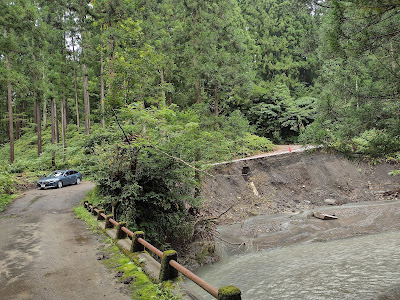 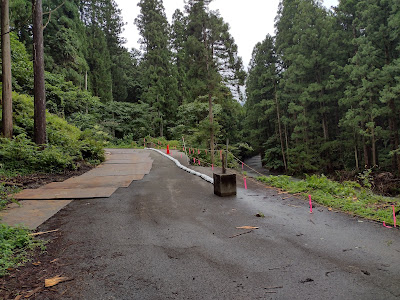 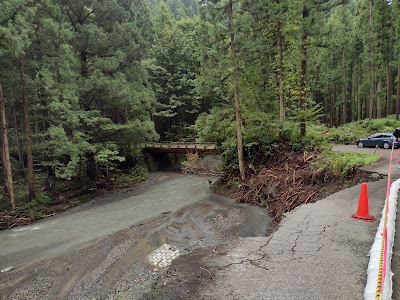 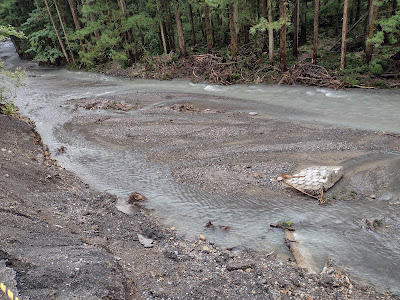 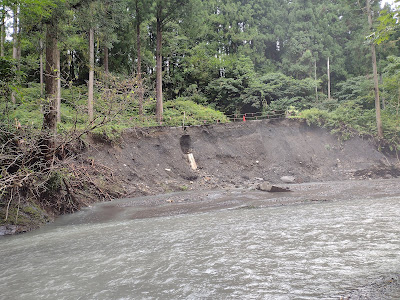 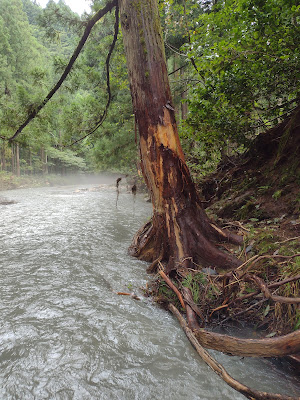 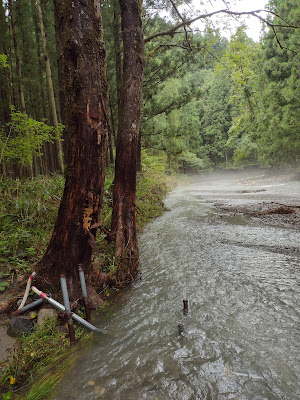 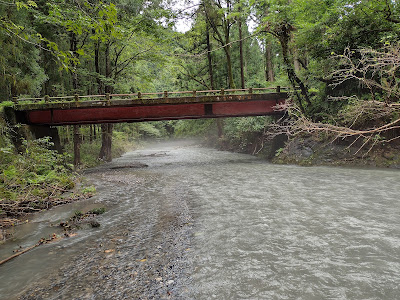 Posted by Andrew Whitaker at 18:30 No comments:

This winter we are undertaking intensive snow surveys from the season of peak snow accumulation to the spring melt-off. Our objective is to investigate the influence of forest canopy characteristics on snow accumulation and melt, and in particular to compare varying levels of thinning in cedar stands.

Below you can see a summary of the results from the first four surveys. Melt season is now well underway in most study plots, although surprisingly it seems the forest opening plot is still maintaining the peak level for snow water equivalent (SWE). The larch plot has been surveyed during more than 20 years, and this year shows a peak value of SWE which is the second highest on record. 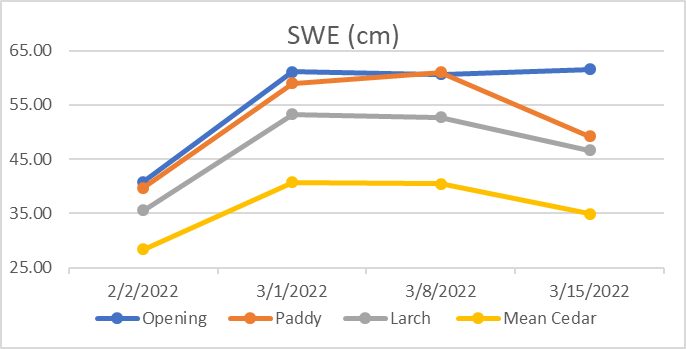 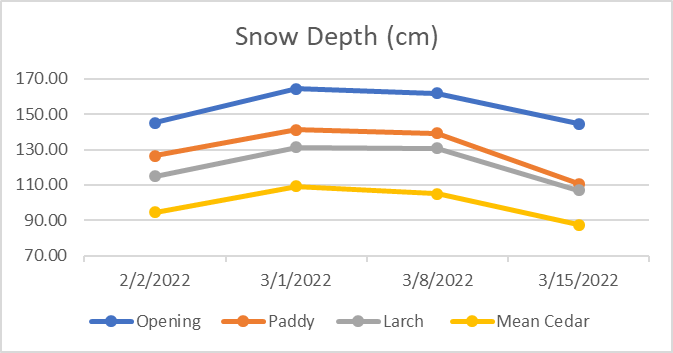 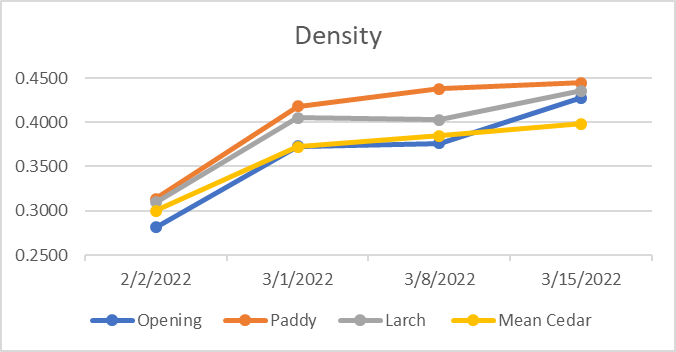 Posted by Andrew Whitaker at 17:49 No comments: 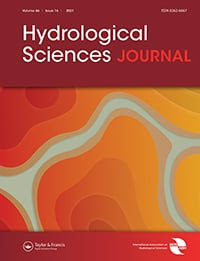 We propose a convenient procedure for the matching strip method in determining the recession constant of the master recession curve using the ratio of flow over successive days (Qn+1/Qn). The method is applied to 29 basins (6.1–740 km2) in eastern Japan to develop linear regression models that estimate low flow indices through the recession constant (λ), and either mean annual precipitation or mean annual runoff. Significant models were developed for Q710 (seven-day 10-year low flow), and Q9710 (10-year low flow exceeded 97% of the time) in the case of all basins, and in particular for basins classified into sedimentary or igneous geology (adjusted R2 up to 0.784). When basins were not classified by geology, models based on mean annual runoff as the second independent variable performed better than those based on mean annual precipitation, with adjusted R2 values of 0.705 and 0.717 for the Q710 and Q9710 models, respectively.

A simple spreadsheet procedure to determine the master recession curve and baseflow recession constant is included in an appendix.

Posted by Andrew Whitaker at 16:31 No comments: 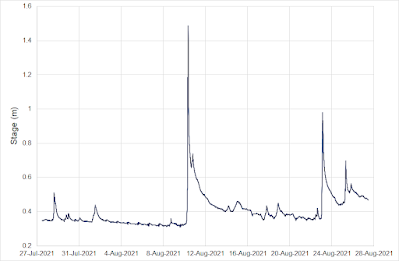 Intense rainfall in the early hours of August 10th caused a moderately sized flash flood, peaking at nearly 1.5 m stage. During one 10-minute interval, the stage rose by nearly 0.5 m! Rainfall intensities measured at Miomote Amedas gauge were up to 29 mm/h, with a daily total of 104 mm.

Today we measured discharge and we observed that there had been much new scouring of the streambed towards the left bank (looking upstream), and in the pool beneath the road bridge. However, the new measurement plots within 4% of the rating curve value, so no change in the H-Q curve detected.

I was glad to see that a developing potential log-jam at the lower end of the riffle below the gauging section had been shifted by the flash flood. The fallen cedar tree was rotated into a new position parallel with the bank, where it is less likely to cause a blockage. 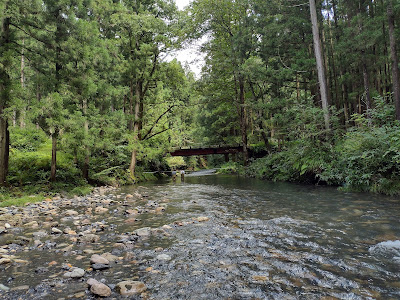 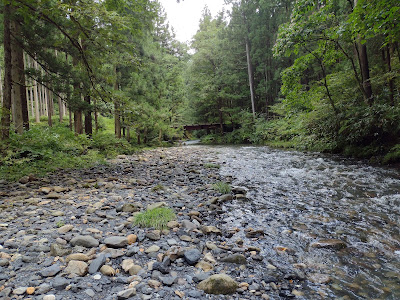 Posted by Andrew Whitaker at 16:06 No comments: 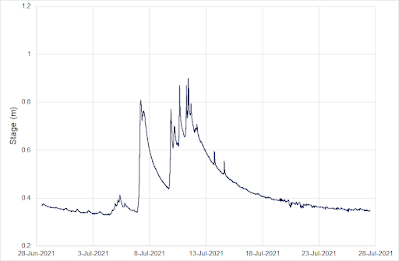 The hydrograph above shows several small peaks of around 0.8-0.9 m stage during the unusually short rainy season this year. The rains normally continue until late July, but this year you can see the rains stop before the middle of July. We can see a long period of flow recession from 12-27 July, during which only 4 mm or precipitation was recorded at Miomote Amedas gauge, and temperatures were consistently in the mid-30s Celsius.

Posted by Andrew Whitaker at 16:25 No comments: 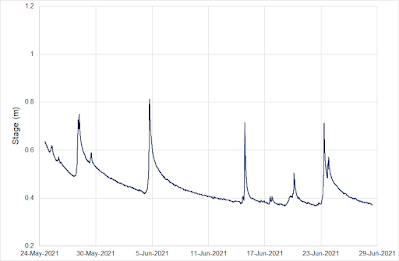 Early rainy season and early summer conditions today with high humidity and strong sunshine, but not such high temperatures yet (just below 30 degrees). The hydrograph above shows four sizable rainfall events, with the largest on 4 June producing a stage of 0.8m and followed by a long flow recession to below 0.4m. On the evening of 14 June there is a very short and intense burst of rainfall (76.5 mm/h at Miomote Amedas gauge) which gives a very sharp peak and rapid decline back to baseflow conditions.

Today the river stage had dropped to 0.372m (discharge measured at 0.458 m3/s) which is one of the lowest levels for the season so far. Depending on the timing of the heavy rains expected during rainy season (late June to late July), flows may fall much lower still.

Posted by Andrew Whitaker at 18:00 No comments: 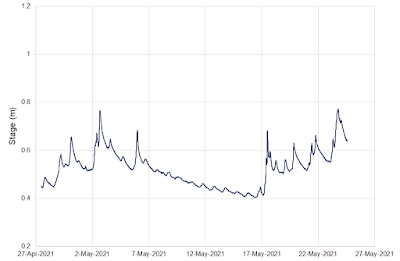 Snowmelt pattern with daily fluctuations in the stage level during fine weather is visible in the hydrograph above during the long flow recession in mid-May. But the signal is not very strong due to the below average snowpack this year, which has largely melted off already by mid-May. May is wetter than average with several rainfall events in early and late May.

We measured the discharge soon after a medium-sized flood (about 0.8m stage), when the stage had fallen to 0.64m with a discharge of 3.35 m3/s. The flow was swift with a maximum velocity of 0.9m/s.

In summary, much of the runoff over the past month was due to rainfall runoff rather than snowmelt runoff, compared to an average year.

Posted by Andrew Whitaker at 18:00 No comments: